February 15, 2017
It is not as if we have been doing nothing while waiting to begin our adventure.  February had us moving our son, Ryan, from Dearborn Michigan to Boulder.  We flew to Detroit on February 1st and helped him finish packing his small house into a 15ft U-Haul truck. 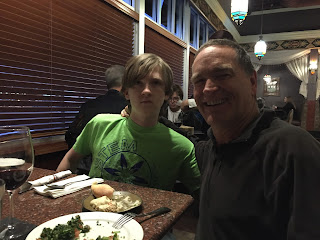 While in Dearborn we spent time with Ryan's boys, and dined at one of our favorite places.  La Pita is a Lebanese restaurant, very near to where Ryan has lived.  It has always been a great place to visit and eat, and holds many great memories. It always strikes us how Dearborn is such a diverse a community. 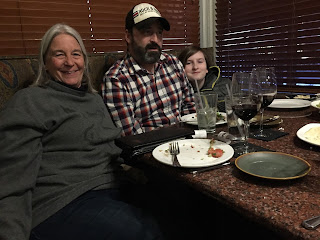 Steff jumped an airplane back to Colorado on the 5th.  At the same time, Ryan and I hit the road with the truck, a car hauler, and Ben.  Ben is Ryan's 3 year old, 120 lb, Neapolitan Mastiff.  We were fortunate that Ben agreed to ride in his kennel in the back of the truck, rather than in the cab with us.  Something he was becoming more and more reluctant to as time wore on.  Luckily, my strapping young son was on hand to lift his reluctant "puppy" up into the truck.

Ryan and I followed a fairly direct route back, making Des Moines Iowa the first night, Ogallala, Nebraska the next, and then Boulder.  We covered the 1,271 miles in about two and a half days of driving.

Steff, on the other hand, arrived in Boulder several hours after leaving Detroit, to find that our truck had been broken into while parked in the park-n-ride.  All we lost was "stuff" and need to replace a "windoor" on the topper.  Oh well....

Ryan has a town home in the same complex where Steff and I had our first apartment some 42 years ago.  It is also where Vadin's dad lives.  Vadin is quite excited to have his Uncle Ryan as a new neighbor.  Once back, it dawned on us that all of our Smith Clan has moved within the last six months.  The final stage of which is when Steff and I leave for New Jersey to pick up AIROSMITH on March 2.  We have already been planning where to go next.