Showing posts from 2016
Show all

These last two weeks on the Big Island of Hawaii have almost been like paradise.  We are very fortunate to have been able to visit three sets of friends who live here.  We are indebted to Zina, Carla and Jake, and Jasmin, Brian, Derek and Meagan for being such wonderful hosts!  Most of all, were are honored to have friends like these people.  Visiting people who live and work here was the best way to see the island from a "local" perspective.  The activities and food where so much better than enjoying a "resort" experience.


It is one of the reasons we have chosen our new nomadic lifestyle.  We hope to travel and visit the many people with whom we are lucky to call friends.  So stand-by, we may come visit you next!


If you are a musician, or love someone who is you simply must visit Kiernan Music Company either online, or in Old Town Kainailu.  Talk to Brian or Derek.


If you visit here, look for good B&B's or Hostels that get you away from a resort and into …
2 comments
Read more 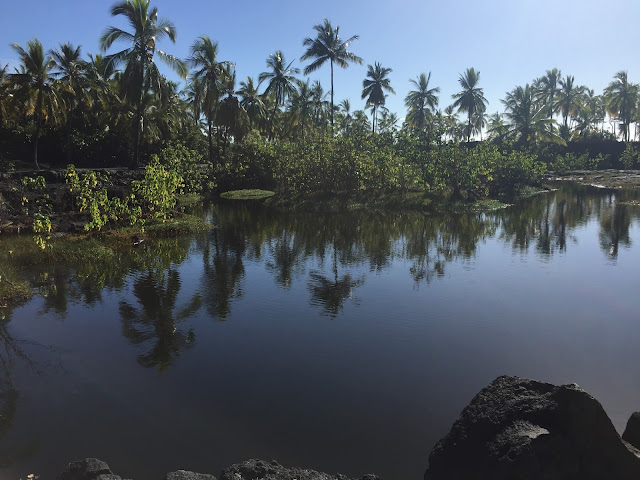 It is Friday, so why not go to a Place of Refuge?  The interesting thing about Hawaii is the mix of culture and history.  It comes home when you visit the Place of Refuge, which has been designated as a National Historical Park.

The history here extends back over a thousand years as royal grounds where kings and queens lived.  And alternately, a place of refuge for those who violated a Kapu, usually resulting in a punishment of death.  Getting there were particularly difficult, as it was Kapu to enter royal grounds.

Most interesting is that the Hale of Keawe, or temple, is still used today by Hawaiians for worship and offerings.

We started our tour of this area by snorkeling along the two step beach.  Once finished, we toured the complex.
The Keone'ele Cove is considered sacred, and is the home of several Green Sea Turtles.  We were escorted around the grounds by small yellow birds, who seemed to consider themselves royalty. 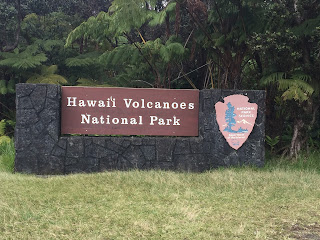 Observation:  I am unable to tell the difference between the frogs, and the birds here in Hawaii.  The only guideline that I can use is that usually birds don't sing at night, and the frogs less likely to sing at day-break.  So, what I hear at night must be the coqui frogs, and the songs in the morning must be the wide variety of birds that inhabit the forests here.
One of our goals for travel is to visit as may of our National Parks, monuments and historical areas as possible.  the Big Island presents a unique opportunity to visit the ecosystem around an active volcano.  We spent the better part of Tuesday AND Thursday visiting the park.

We visited Tuesday with friends Jake and Carla.  Both have volunteered with the Friends of Hawaii Volcanos National Park and know the park well.

We started our visit with a walk through the Thurston Lava Tube providing a graphic reminder of how large these can get.  Midway through in the cold and dark it is difficult to imagine this large river …
Post a Comment
Read more 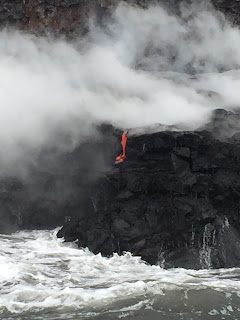 About that Lava Boat tour....

Jake and Carla, our friends and wonderful hosts here on this side of the island, suggested taking a "small boat" tour to see the lava flow enter the water.  These small boat tours differ from the big boat tours in that there are a maximum of 6 passengers on the small boat, and upwards of 50 on the larger ones.

We took the chance Monday morning to get a ride, and learned that there was room on a later tour, starting at 3:30PM.

Capt. Kana from Moku Nui Lava Tours told us that the water was like glass, and the flow, as it entered the water was very active.

We joined 2 other couples for a 40 minute ride to the lava flow, spending about 45 minutes enjoying the show, and another 45 minutes back to the beach.

It is difficult to describe the magnitude of the flow, as the lava enters the water.  And pictures don't capture it either.  This most recent flow entered the water in July.  It is dependent upon the depth of the lava lake in the Halemau'…
1 comment
Read more 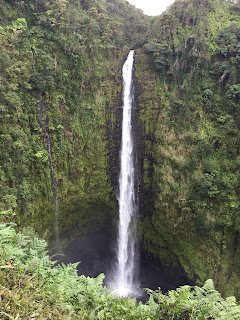 Monday morning started with the hope of catching an early morning Lava Boat from the Issac Hale Beach Park.  Fortunately for us, there wasn't room for us but more on that later.

Instead, we decided to visit a waterfall that we had read about.  It is located about 11 miles north of Hilo.  Parking in the parking lot, we took the half mile loop, giving us views of both he Kahuna and the Akaka Falls.

The Akaka Falls, at 442 feet, is the longest free fall waterfall in Hawaii.  It is located along the Kolekole River which begins on the slopes of the 13,803 ft Mauna Kea.

There is an interesting legend regarding the origin of Akaka Falls and the chieftain who in remorse of his infidelities towards of his loving wife, and threw himself over the falls.
The walk meanders through a rainforest, which receives over 84 inches of rainfall a year.  To walk the loop (follow the directions and walk it counter-clockwise) be prepared to navigate some stairs!