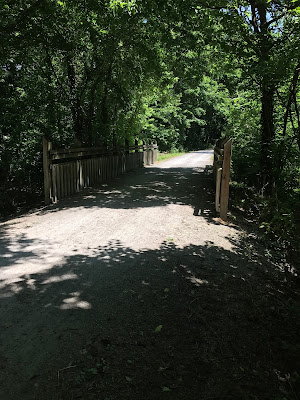 My Bride read about the Katy Trail in Motorhome Magazine and suggested that we should take a look.  It is one of the nations oldest "rails to trails" systems, and at 240 miles is the longest.    The rail-bed was the home of the Kansas Missouri and Texas Railroad, known as the KT.  There is an excellent map and description of services you can find along the way. 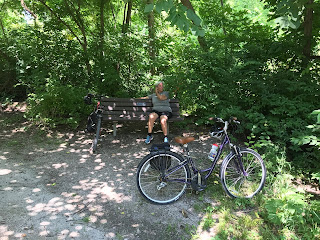 While many folks ride the entire length self supported, it is also very rideable in sections.  My Bride especially liked the fact that it gains a total of 500 feet in elevation, over the 240 miles.  She felt that she could handle that type of climbing!


The Motorhome article suggested campgrounds along the way, and we generally followed their recommendations.  Our plan was to spend several nights at each and do shorter daytrip rides out of our campground.  The article also suggested various places to visit, eat and explore.

Our first stop was in St. Charles and our campground was only minutes away by bicycle.  We rode into St. Charles the first night and had a wonderful dinner in town.  As I previously wrote, this area is ripe with vineyards and wineries, and we tried to take full advantage.

Much of the Katy Trial parallels the Missouri River.  An additional benefit is that it also tracks the same route taken by the Lewis and Clark Expidition some 213 years ago.  Coincidently, many of the places we visited were either on, or very close to the same day that those explorers and their merry company were there.

In Hermann, we stayed in the municipal campground which is recommended by everyone.  We met a young couple from Arizona, who were through riding the trial.  They had taken a train from Sedailia to St. Charles and were riding back west.  They were amazed at the amount of undergrowth and how green everything was.  She was surprised that when the map showed a stream, there was actually a stream and it had water in it!  Not at all like Arizona. 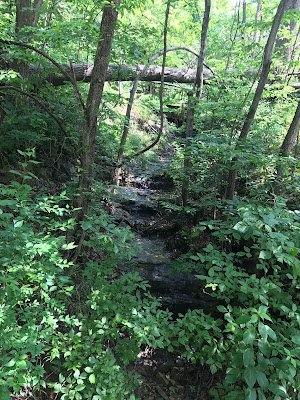 We also talked with a family of five kids and two adults who were riding a section of the trail.  Three of the older kids were riding bikes.  Mom had a tag-a-long for a younger daughter.  Dad was riding a tandem but the front was a recumbent where his disabled son rode.  They set up, and took down camp like an expidition.  They told us that they were riding about 120 miles of the trail.  I wondered who of these riders we might see on down the road.  I did see the Arizona couple ride through Rocheport about 65 miles on, the very next day. 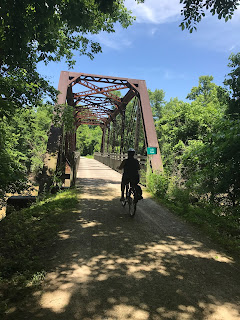 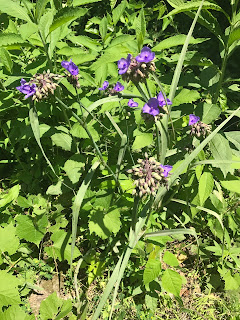 It was in Hermann that we took our first damage to AIROSMITH.  We had become lazy and left the awning out overnight.  At 5AM we awoke to a massive downpour and thunderstorm.  There was not much wind, but the amount of rain coming down was staggering.  About 30 minutes later I heard something hit the trailer, followed shortly after by a very close lightening strike.  That got both of us out of bed. 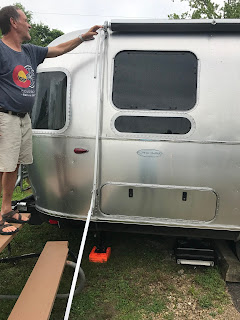 Once my eyes adjusted to the light, I saw the back half of our awning laying on the ground.  When the storm passed and we could assess damage, I saw that the water weight had broken the rear main support arm.  It appeared that was the only damage.  I was able to stow the awning using my jigsaw (one of the only two power tools I thought to bring) to cut off the damaged portion of the arm.  Fortunately we already had scheduled a service appointment in a week, so we just emailed them with another job to do.  Despite the damage, we felt fortuate as our neighbors awning was completely ripped off of their 5th Wheel. 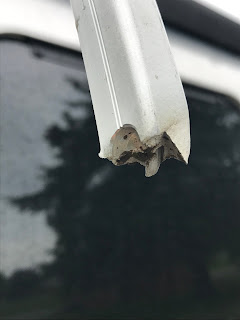 One of the more scenic areas along the trail was outside of Rocheport.  We had camped at the Katy Roundhouse Campground, in New Franklin that upon first take looked to be virtually abandoned and overgrown.  However, once settled in, we found it to be a wonderful spot, only about 50 yards off the the bike trail, and in a park we had virtually to ourselves. 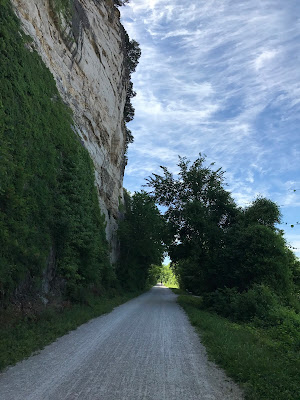 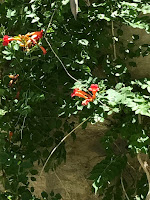 The trail east out of Rocheport rides along steep limestone cliffs, and very close to the Missouri.  Just to the west of Rocheport is an iconic tunnel covered with vines.  As we began unloading our bikes at the trailhead a man came running over from the building across the street.  He was asking where in Colorado we were from.  It turns out that Brandon, and his wife Whitney were in the process of opening a cafe and bike shop.  There was much activity there.   Painting outdoor furniture.  Unloading bicycles.  Upon returning from our ride, Steff's eyes were pulled toward their place because of the flower baskets Whitney had put out front.  The very best type of advertising. 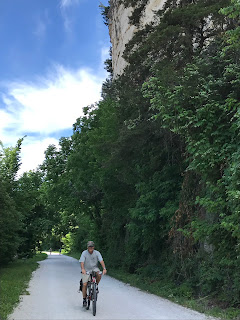 We told Brandon that we were from Boulder.  Thrilled, he said that they had lived in Lyons.  They both had worked at the St. Vrain Market.  He said that they moved back to Missouri after the 2013 flood.  Telling the story of how he and his wife and other family members, who were visiting, had been trapped in Big Elk Meadows above Lyons, for three days before being rescued by helicopter.  They moved back "Home" and began saving their pennies to open their own place.  Visit Meriweathers.  I'm sure you can't go wrong. 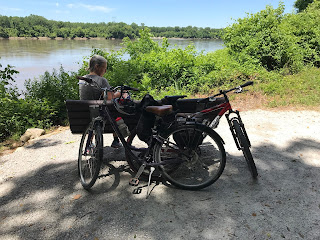 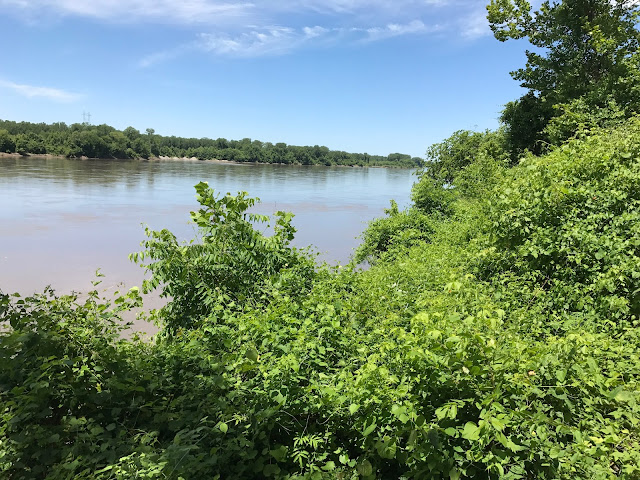 Our last stop on the Katy was south of Clinton, and didn't include bicycle riding.  We stayed at Bucksaw a Army Core of Engineers campground on the shores of the Harry S. Truman Lake.  COE campgrounds are very good, often with full hookups and great facilities.  As we were close to the water, we took advantage and spent a morning paddling.  I also tried to catch some giant catfish that no doubt would have pulled me around the lake if I had hooked one.

We left the Katy with a desire to return.  I would very much like to ride the entire length, while My Bride could handle support by moving AIROSMITH ahead to the next campground.  Spring or Fall would be ideal times.

As is often the case with many of the places we visit, we left the Katy Trail with more reasons to return.