Wyoming and the Eclipse - August 2017

How often do you get a chance to be in the middle of a full Solar Eclipse?

We had originally planned to head to Canada, after our Family Reunion in Montana.  We had several weeks to spend before volunteering for the Tour of Alberta pro bicycle race held over Labor Day.  We would travel in Alberta and British Columbia before checking in for the race.

Then we started looking at the eclipse.  Some of the Smith family were headed to the Cole Creek Sheep Company, and Shelly and Kem's home, which sits directly in the path of "totality".  The large ranch is located just outside of Casper, Wyoming.

We had recently travelled through Casper on our way to Glacier National Park.  Looking at the map, I mentioned to My Bride that we would be "backtracking".  She reminded me that we don't backtrack....we travel.  As always, wise words. 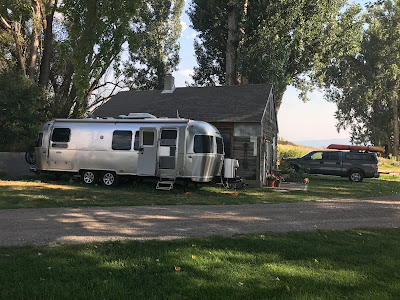 We planned our trip to Casper and took the opportunity to visit another cousin and his family, who live on a ranch south of Flathead Lake in Montana.  Cousin Bill is 'retired' but you couldn't tell once you saw how he and the family work the ranch.  It is a family affair and was fun to watch.  They raise cattle, as well as grow the hay to feed them.  They grow enough to supply hay to nearby farms and ranches.  In their spare time they are remodeling the ranch house.  The entire family were gracious hosts to AIROSMITH. 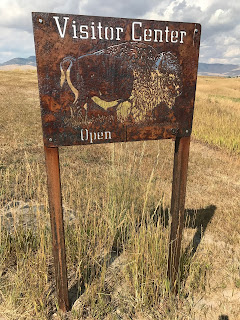 The ranch is adjacent to the National Bison Range.  Established in 1908 by President Teddy Roosevelt, the land was intended to begin conservation efforts for the American Bison.  Unregulated hunting and exploitation had reduced the population from over 30 million wild animals, to just 100. 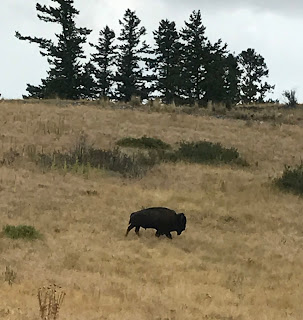 Conservation efforts have grown that number to about 500 which is sustainable for the range they have.  Surplus animals go to other State and National Parks and Refuges to grow those numbers.  They are also made available to Native American Tribes.  The Refuge continues to play a key role in Bison conservation. 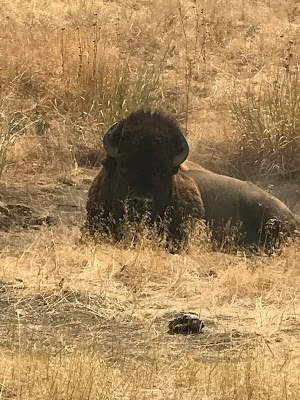 Our drive through the range land let us view and understand the geology of the Flathead and Mission
Valleys, where we saw not only Bison but Mule Deer, Elk and Antelope. 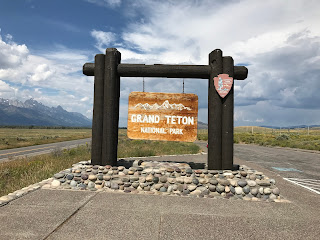 Our next extended stop was the Grand Teton National Park.

Here is an important note.  Should you find yourself tempted to tow a medium to large travel trailer over Teton Pass, think again.  Coming down the eastern slope towards Jackson was one of our hardest drives yet.  Follow good advice and take the route through Alpine.  It will save you worry, and break pads!!


One reason to visit the Teton's was to visit with a longtime friend and former colleague.  Bryan is a seasonal Park Ranger.  How cool of a job is that!

He had offered to use a day off and take us on a kayak float down the Snake River.  It is the same float he guides in one of his Ranger led programs.  We met him and friends Leo and Julie just below the Jackson Lake Dam.  From there, we floated 2.5 miles down the Snake River taking out at Pacific Creek about 5 hours later.  During our trip I caught up with Bryan, saw Bald Eagle, White Pelicans, Herons, and Beaver.  A highlight was watching an Osprey take a fish from the water in Oxbow Bend.

Later that day, we watched the sun set behind Mount Moran from the top of Signal Mountain.


The next morning it was off to Casper and the Eclipse.  My cousin Eden is an "amateur" astronomer.  I use the term only in the sense that he is not paid for his expertise.  In every other sense he is an
expert professional!  He would not miss the opportunity to be in the middle of a total eclipse.  Better yet, he would happily share the science of the event with everyone.  For many, this is a once in a lifetime opportunity. 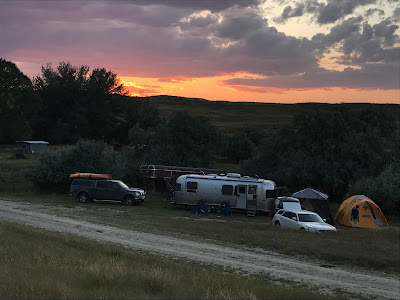 Opon arrival, we set up camp near the original ranch house.  Our closest neighbors were sheep, horses and antelope.  Ashley, Juan and Vadin soon set up their tent next door.


Driving the several miles between our campsite and the main ranch house where the family would gather, involved crossing several miles of wide open Wyoming prairie.  We would always be escorted by antelope, deer and rabbits.  I loved watching the antelope race across the open land.  It suggested to me what Africa's open Savannah must be like. 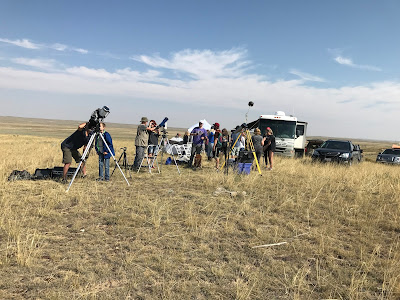 We had a wonderful time visiting with family.  The most unique aspect of the trip was to be smack dab in the middle of a total solar eclipse. 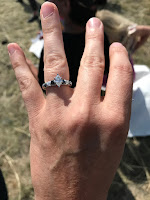