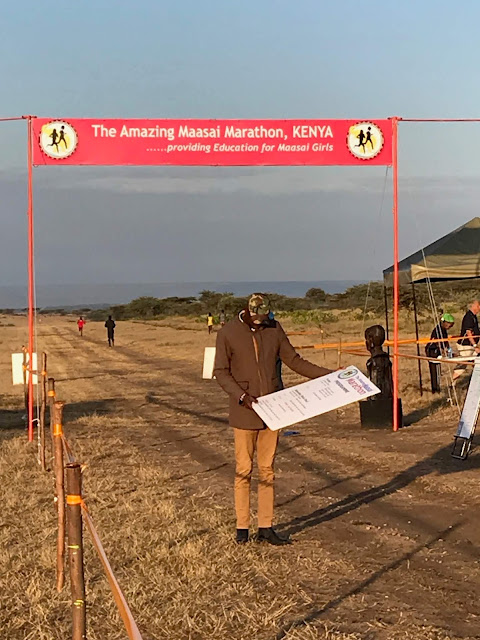 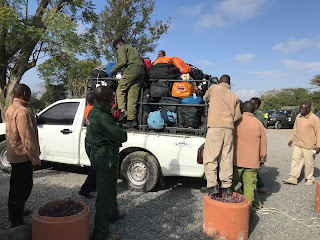 It was a four hour jeep ride from Sweetwaters to the tented race camp outside of Kimanjo.  The jeep ride was because you really need the jeeps to get there.  The 50 some humans divided ourselves into a half dozen jeeps.  Our baggage was loaded onto one, small, pickup truck.  An amazing feat in it's own right.


We passed an "18 wheeler" dumped on it's side on a steep downhill on the dusty road we were traveling.  Robert, our driver, suggested it wasn't so much the road conditions that caused the accident, but an attempt at an insurance claim.  The truck had been there for days.

Being a group made up mostly of marathoners, who were hydrating for the marathon the following
morning, we made sufficient pee breaks.  These breaks come with company.  Any idea how hard it is to pee with a giraffe looking over your shoulder?


Arriving at Kimanjo, our drivers were confused as to where, exactly, the tent camp was located.  With the help of about a dozen residents, and several armed rangers on motorbikes, we found our way.


The tented camp had been described as more "rustic" than what we had been, heretofore, used to.  There would be no electricity to charge your smartphone!!  That said, each came with solar powers lights, a "drop" toilet and shower, and a porter who would provide hot water for a shower, and clean your running shoes upon demand.  Rustic indeed.

Let me describe the drop toilet and the shower.  The toilet is a hole in the ground, whith a seat placed strategically above.  Once you have completed your "business" there is a handy pile of dirt with which to cover it up.  Doing so reduces the smell, and is wholly organic.


The shower is a large plastic water barrel, suspended above, with a hose attached.  The porter, upon request, will supply hot, warm, or cold water for your shower.  The porters will ask if you want water for a shower a minimum of three times a day

The above facilities are enclosed with the same tenting material, and is attached to the back of your tent.  The "doors" are tent flaps that are not only secured with zippers, but with industrial strength velcro.  This is done to ensure that your neighbors know when you are using either the drop toilet or the shower.


Meals are buffet style and offered in the Mess Tent.  Off to the side there is a cash bar.  The food and drinks were excellent.  Every meal equaled what we enjoyed at Aberdare and Sweetwaters, due the the camp caterer.

After settling in at camp, we took the opportunity to visit the reason for this race.  The girls school in Kimanjo.  This marathon benefits several schools that provide secondary education for Maasai girls.


Education is valued by the Maasai.  All children attend primary school, paid for by the government.  Families need to pay for any secondary education.  Due to the expense, mostly boys attend.  Often, just the oldest if money is tight.  Also, culturally, girls are expected to marry and then support their families.  Often these girls are married while very young.

The Amazing Girls Project raises money for as many girls as possible to attend secondary education, giving them an opportunity to attend university.


The school in Kimanjo is one of the schools that benefit from the project.  While visiting, we were able to see the facilities, meet the staff and the girls.  Several girls talked about their dreams and how the project has helped them.  They want to become teachers, doctors, lawyers and other professionals, and then come back to help their communities.  It was awe-inspiring, and made the prospect of doing the race much more fulfilling.   Many of these amazing girls would be participating in the race.


The pre-race briefing was held in the Mess Tent, to be out of the rain.  It included all the necessary information about the race itself.

The race offers a full marathon (26.2 miles), and half marathon (13.1 miles), and a quarter marathon (10.6 miles).  The briefing also included rules for camp life.  We were told that the armed rangers were to keep the wildlife at bay.  We were encouraged to remain at camp as there had been a "grumpy" rouge elephant visiting over the past several days.

While my running days are a bit behind me, I decided that I would complete the Half.  Steff, who never really enjoyed any running days, chose to complete the Quarter.  This would be her FIRST (and quite probably her last) official running event.  Running for Steff and I is the operative word here, in that we were going to walk our distances.


We were up early, breakfasted and a group of us jumped into a jeep for our ride to the start line.  After bumping over rocks and ruts, along the rough roads, the driver stopped at the first "Race" sign indicating that this would be the start.  We doubted him, as we were the only ones there.  He seemed to indicate that the start was just over the hill.  Not so.  Keeping the driver with us, and finally managing to flag over one of the other jeeps speeding past, we learned that we were not at the start.  Jumping back into our jeep, we commanded the driver to "follow that car"!  We soon arrived at the real start.  It seems that being "mis-located" is common on the Mara. 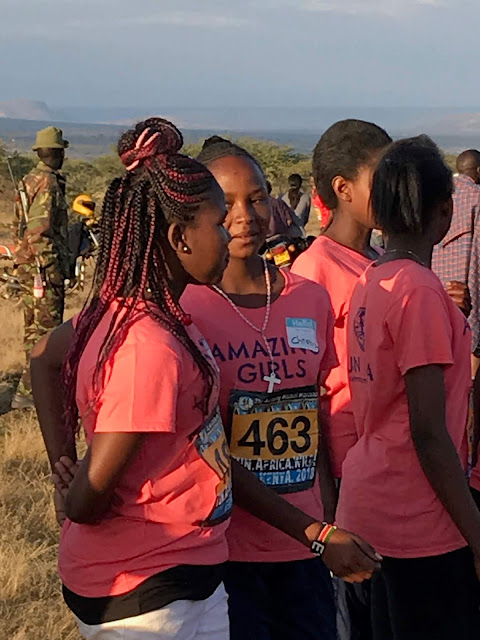 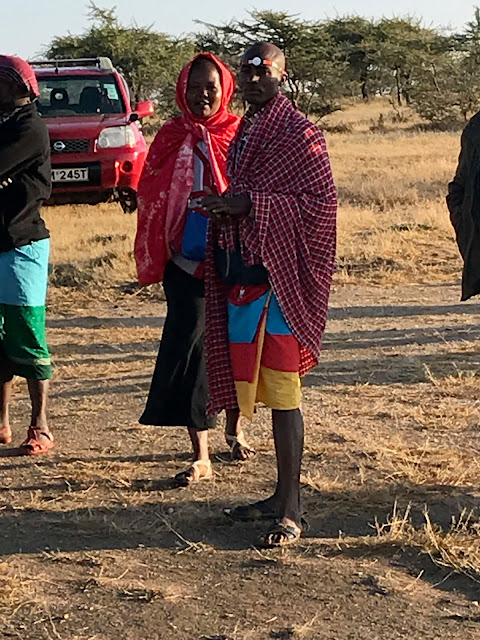 I considered my race to be a ramble on the Mara.  Since Jacqui had talked us into coming, I decided to walk it with her.  Just like old times!  To say nothing about how Jacqui walked the course an additional time, to support an amazing woman who was completing her last marathon to complete her seven continents goal.

There were three members in our group who were completing their seven continents.  Meaning that they have run, and completed a marathon on all seven continents of the world.  It is a big deal and a huge accomplishment. 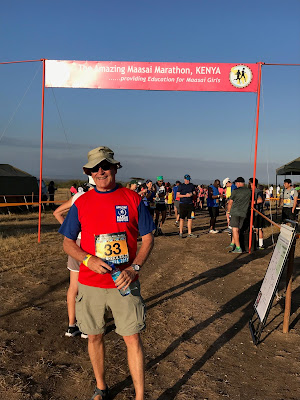 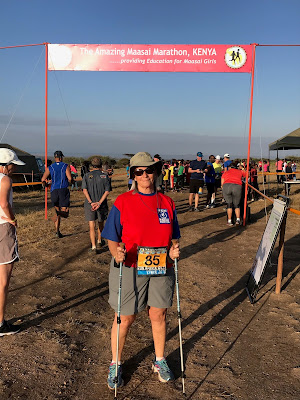 The race is a circuit through the hills of the Mara, and passes past several Maasai Enkang, or compounds.  One trip around the circuit was the half marathon.  A second trip completed the full.  The quarter had a cutoff on the main course to the finish. 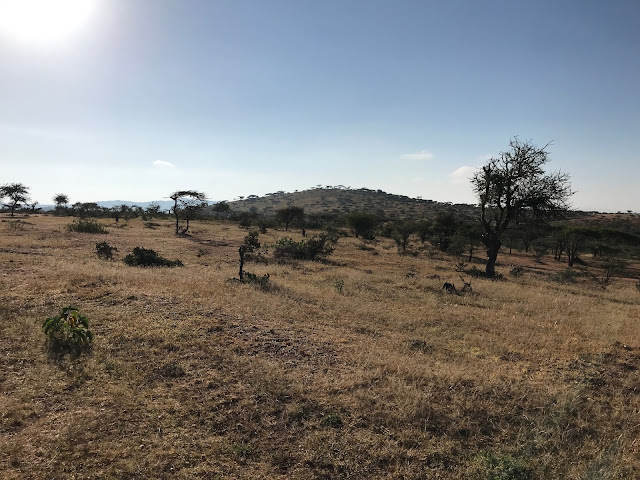 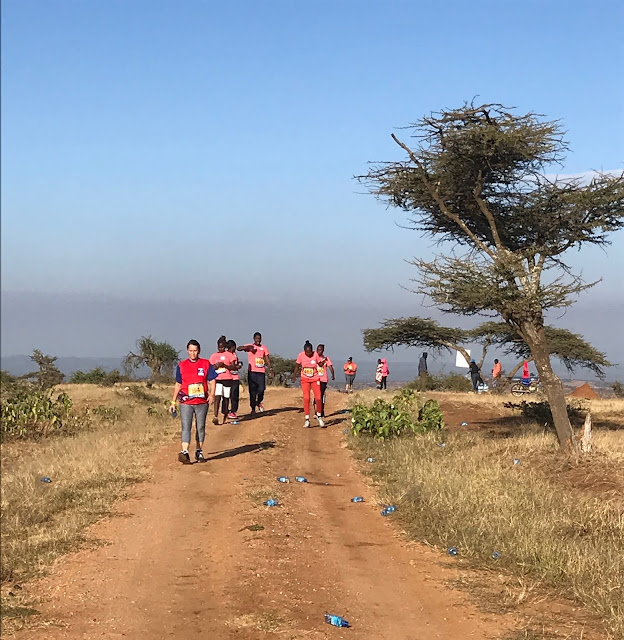 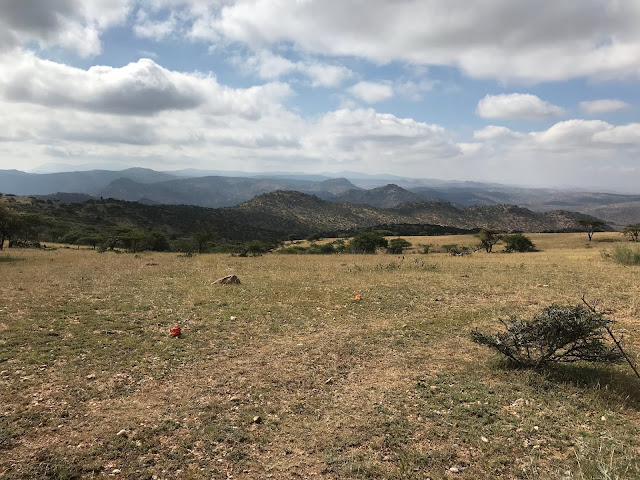 The race was fully supported with bottled water about every 3K.  As you passed these Enkang, community members would come out to cheer you on.  Mostly they were the children, and mostly they were asking for sweets! 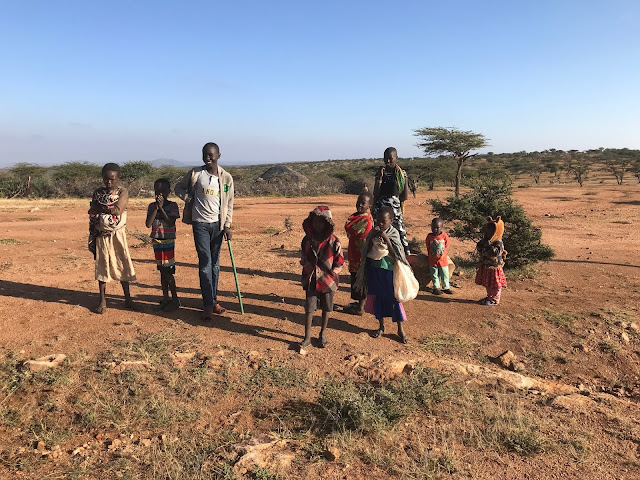 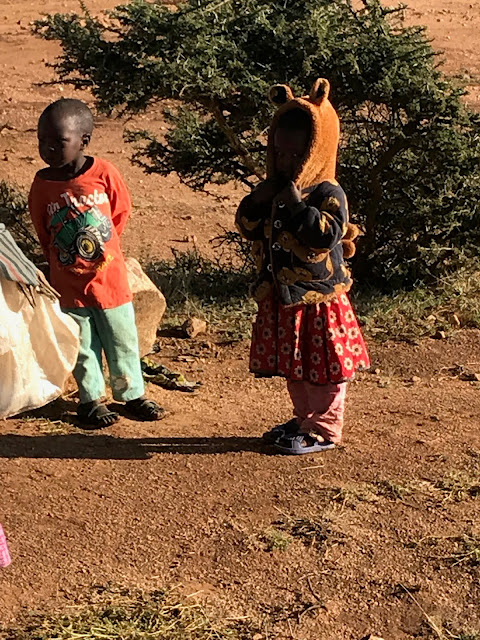 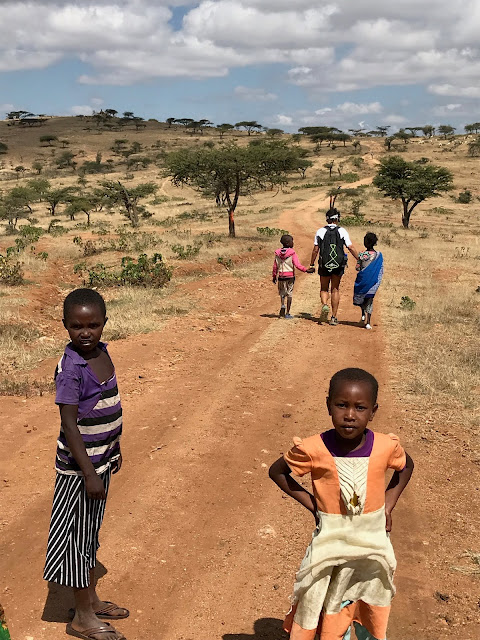 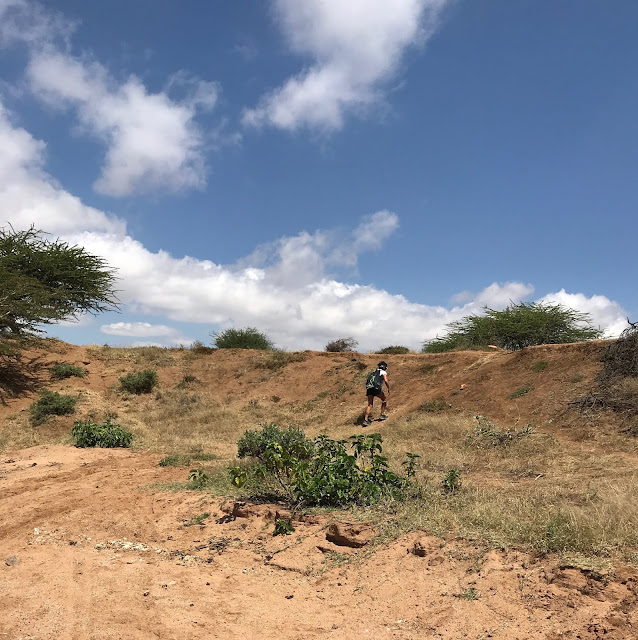 Jacqui and I were passed by the race leader who was about half way through his last circuit before we had reached the midpoint of our Half Marathon. 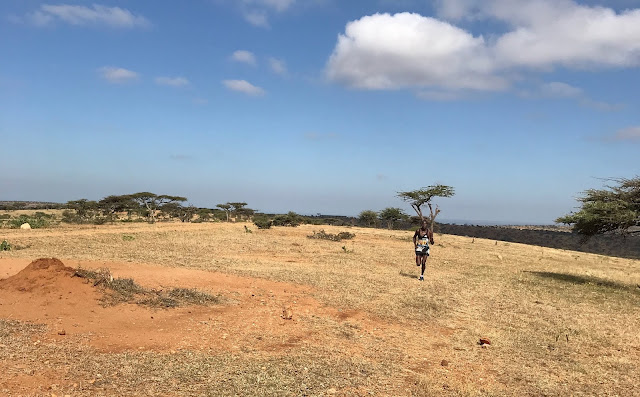 We would walk past shepherds and their flocks of goats and cattle. 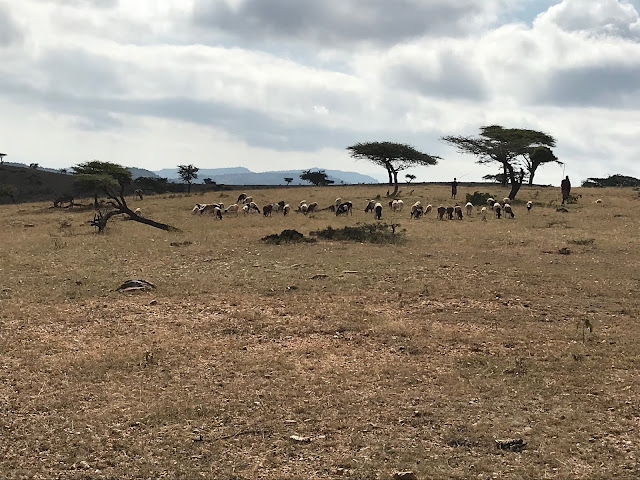 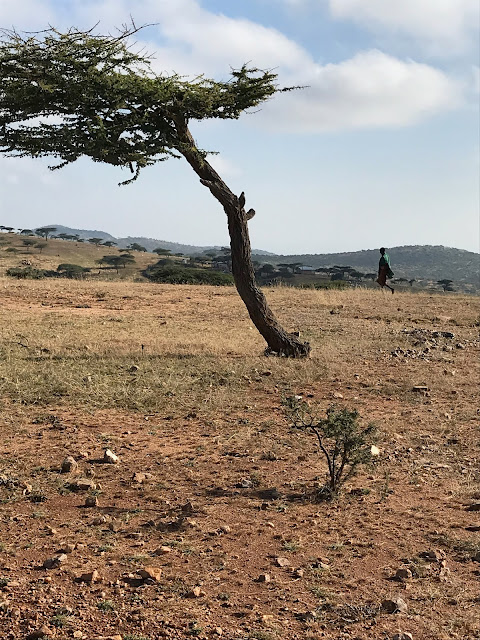 At one point we ran through a heard of domestic camels, who took an interest in us.  One ended up chasing me for a bit.  It gave me an opportunity to work on my sprint! 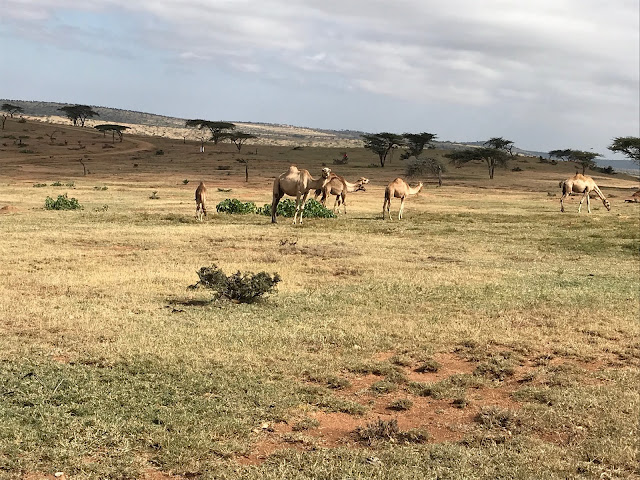 Steff was joined by the wife of one of the race organizers.  She joined her at about the 2K mark.  They talked the entire time.  Steff was happy.  And happier still that she crossed the finish line before me. 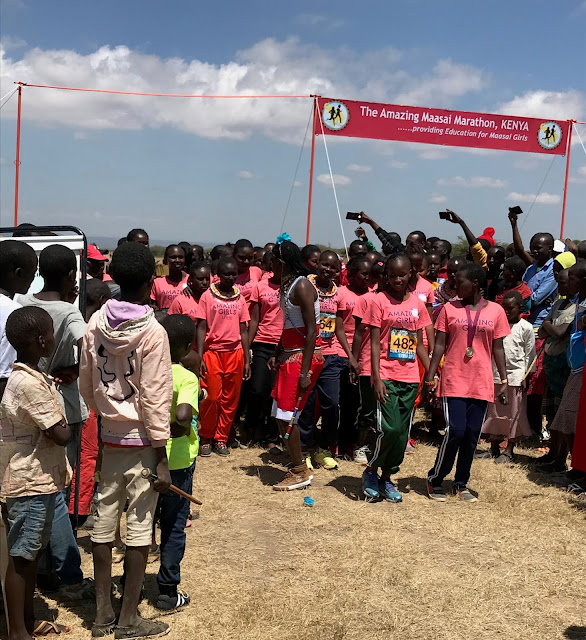 That evening, we all celebrated at the Mess Tent.  We applauded our three members who completed their seven continents, receiving their medals and certificates.  I was most inspired by Shauna!

We went to bed tired, and happy.  Early the next morning we would leave for Governors Camp. 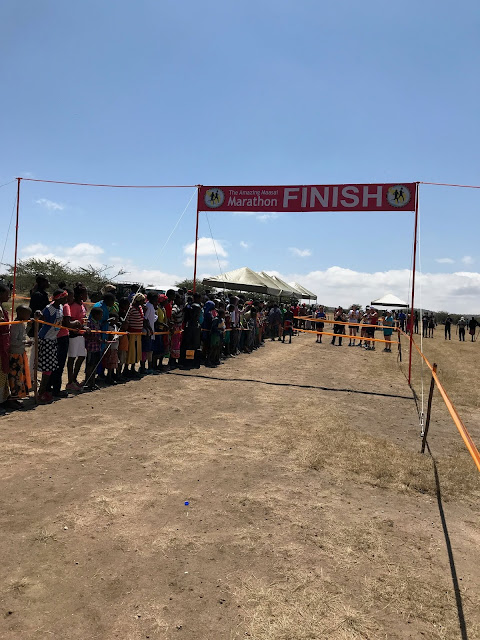