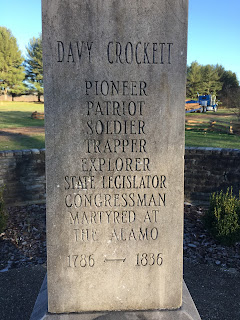 John Love picked us up in the morning, who along with Keith gave us a day long tour of Greene, Washington, and Unicoi Counties.

We couldn't have seen this area in any better way. We drove past farms and homes that played a large part in their growing up here. We visited Erwin, Unicoi, Johnson City and Jonesborough.  Spending the day driving through the hills and valleys of Eastern Tennessee and seeing early spring here was a pleasure.


Lunch was at Scratch Brick Oven.  http://scratchbrickoven.com.
Keith says it's the best hippie style pizza in town. It looks like this small restaurant was built around the large brick oven made from what looks like River Rock. It is 9 feet deep, and 6 feet high and the pizza was great!

Keith insisted we sample local soft drinks. Dr Enuf, http://www.drenuf.com or Vitamin E as one of his desk sergeants called it, and Cheerwine  https://cheerwine.com, a robust Cherry Coke like drink.

Jonesborough established in 1779 is the oldest city in Tennessee, and once served as the Capitol for the lost state of Franklin.  We learned the story of John Sevier and his move to establish Franklin in areas that are now North Carolina and Tennessee. After a short battle, John Sevier surrendered, but would only do so to Col. Love, (an ancestor of John and Keith) because he was an honorable man. Later Sevier served as the first Governor of Tennessee and in the US House.

We stopped and sampled at the Tennessee Hills Distillery, located in the Salt House in Johesborough.  The Salt House is where the Union Army stored salt supplies during the Civil War. The owners have restored and repurposed the building, and distill their liquor traditionally. We tried the corn liquor and rum that they had on hand. We liked the Dark Roast, and are looking forward to pairing it with Buffalo Trace's Bourbon Cream.

The evening was capped of with John and Mary and dinner at Fatz, and a St Patrick's Day Concert at Niswonger Performing Arts Center.  The concert was “An Irish Heart” that included Chloe Agnew and the Atlanta Pops Orchestra. Agnew toured with the Celtic Women before starting a solo career. She was joined by an Irish Tenor, Dermot Kiernan and Celtic Dancer Scott Porter.

A highlight of the evening was listening to Kiernan sing Danny Boy.   We returned to home through a hard rain storm, and fell asleep to the rain falling on the roof of AIROSMITH.

While here we stayed at the David Crockett Birthplace State Park.  This campground is located along the banks of the Nolichucky River that flows from the Appalachian Mountains.  The rain over the past several raised the water level by about 2 or 3 feet.


The park in Limestone, Tennessee is where Davy Crockett was born.  As a Colorado boy, it is interesting to see this area as territories included in the great westward expansion.  While North Carolina was one of the original states, Tennessee and parts west were Territories.


We really could not ask for a better time here in Eastern Tennessee, and the hospitality of the Love Brothers is in matched.