Pierre was our guide for a 3 hour walking tour through Old Montreal.  We have found that this is one of the best ways to tour a city that you don’t know.

Old Town extends from Rue St. Pierre on the west to Rue St Claude on the east, and Rue St Paul on the south and Rue St Antione on the north.  This section is roughly 1km long and .5km wide.  Yet within this section you learn the city’s history beginning in 1642 and the Indigenous, French, Scottish and Irish influences.  The old city and port are contained in a 4km wide section that extends from the St. Lawrence River to the base of Mount Royal.  It is very walkable in this section. 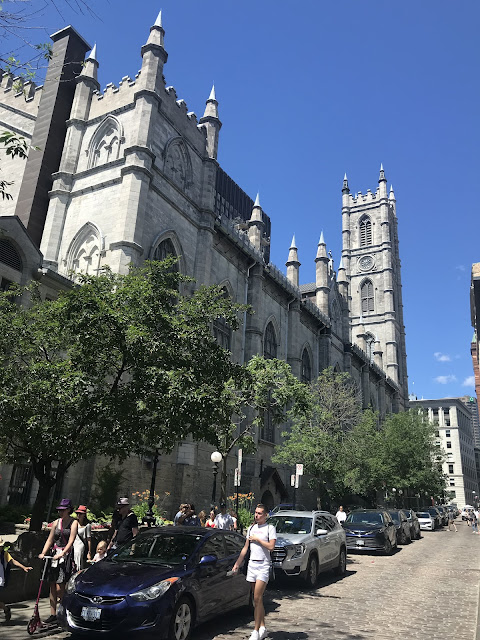 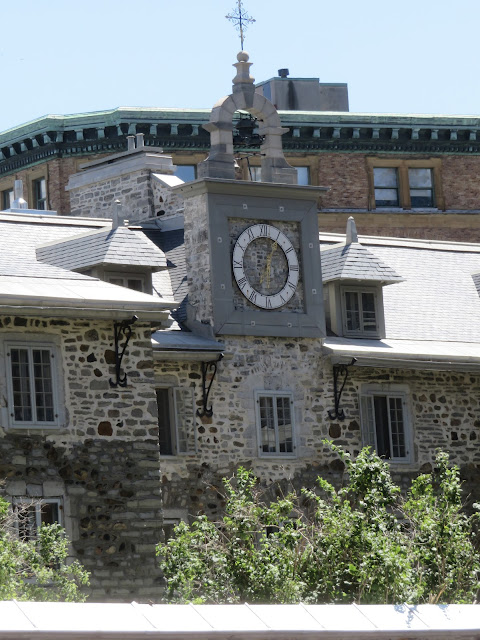 Directly across Rue Notre Dame you find the Palace D’Armes and the Maisonneuve Monument.  Paul Chomey d’ Maisonneuve was the founder, and first governor of what would become Montreal. 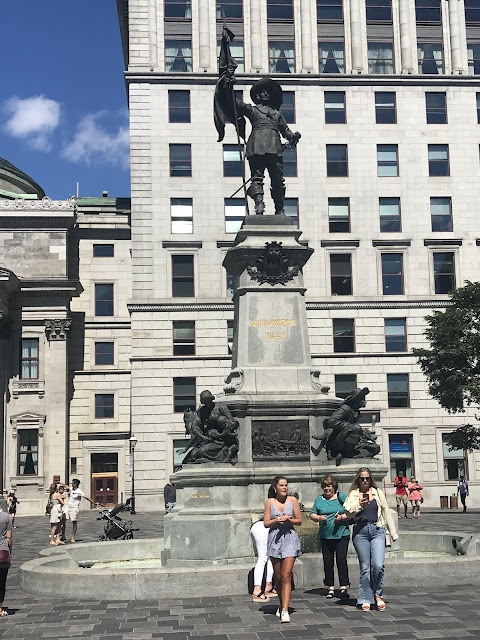 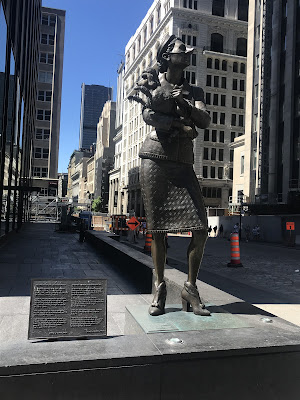 Also at the Palace D’ Armes is a pair of cast bronze statues that capture the interplay of Canada’s French and English influences.  First you have a stylish French woman, holding a French poodle, looking at the the Bank of Montreal with an exaggerated upturned nose.  As if holding the English, represented by the bank, in contempt. 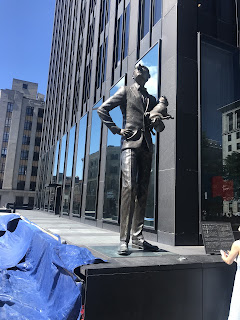 About 200 feet away, a companion bronze depicts a proper English gentleman, holding a pug. Like the woman, he has his back to her looking at the Basillica, his exaggerated nose upturned, showing contempt for the French influence depicted by the church.  However, looking at the dogs each is holding, they look at each other in friendship and interest. 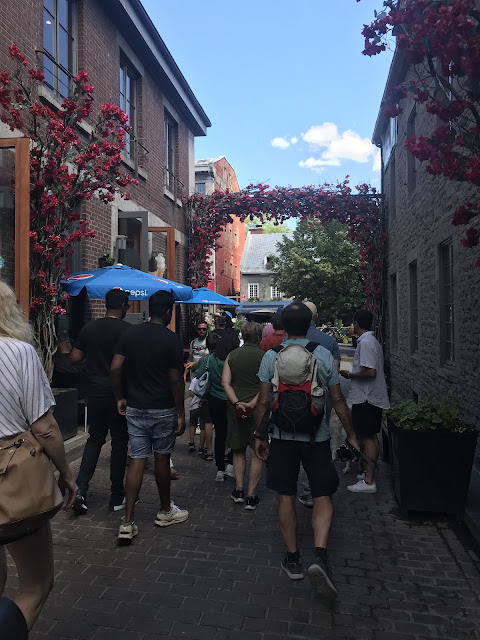 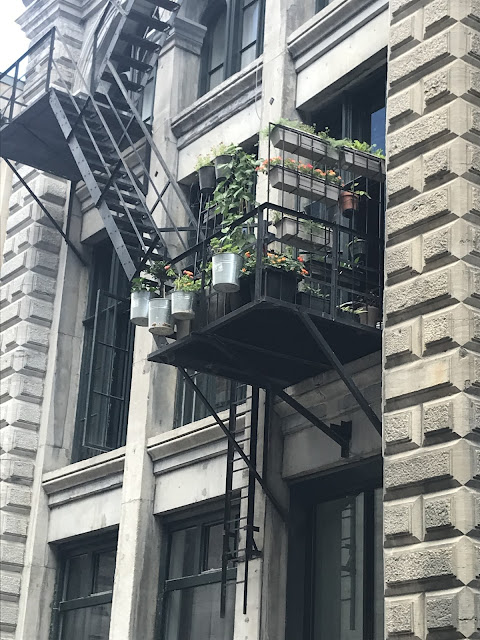 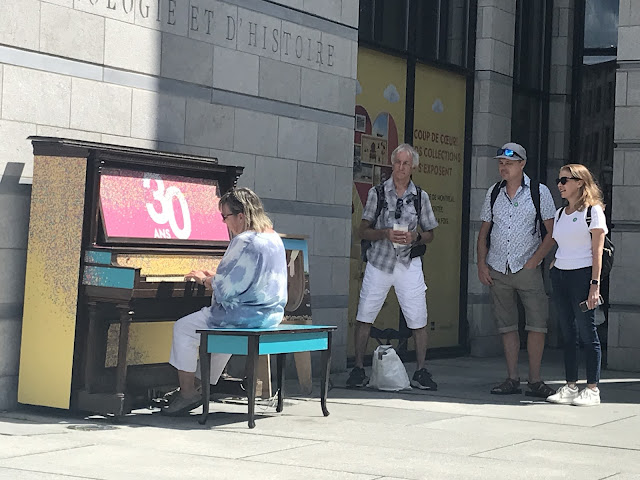 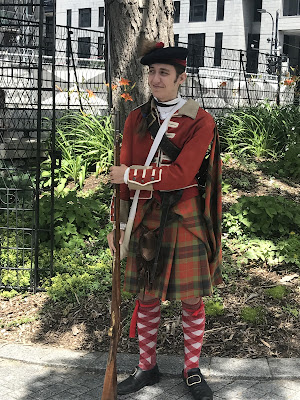 The Chateau Ramezay was built in 1705 and served many purposes since.  Today it is a museum and one of the oldest buildings in Montreal.  Also on the grounds of the museum is a garden created and maintained as a traditional French colonial garden.  It is separated into three parts to include vegetable, ornamental gardens and an orchard.  The produce from the gardens are donated to various food banks.  Docents at the museum appear in period costume. 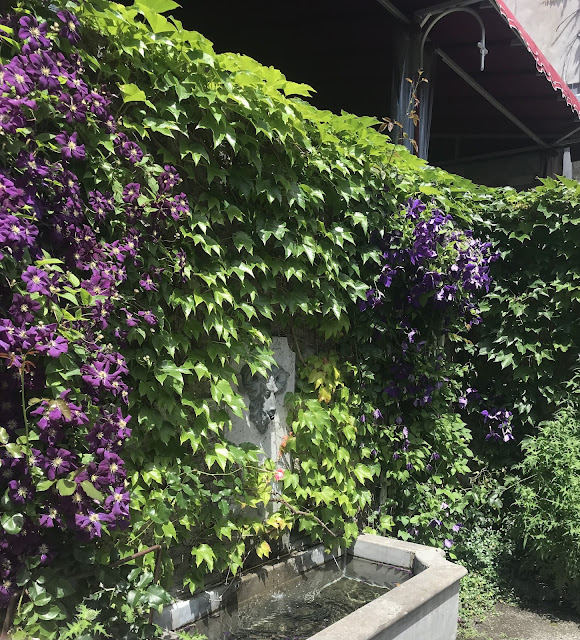 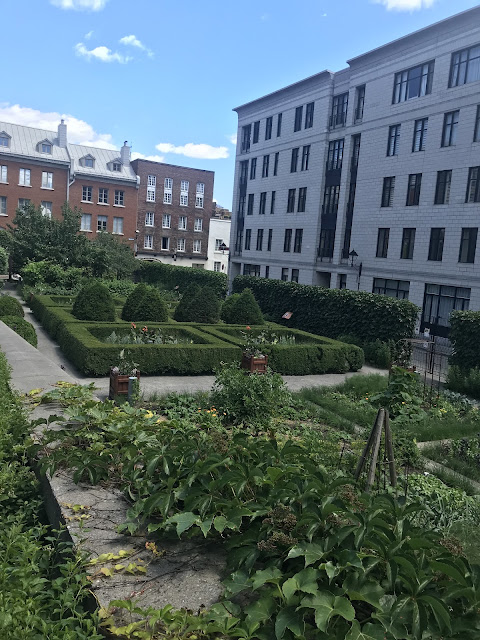 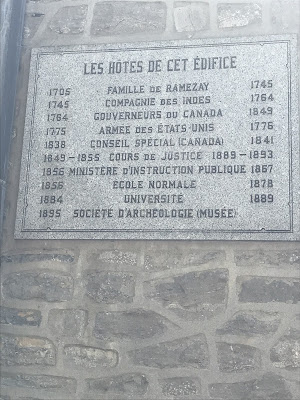 Our guide often pointed out the progression of sovereignty of Canada.  First the Indigenous peoples.  Next settled by France, then the English with Scottish and Irish influences.  However, a glance at this plaque shows an influence from what was to become the United States.  Benjamin Franklin was the emissary sent to negotiate the purchase of the territory, and intended to be the 14th Colony.  For 9 months, from 1775 to 1776 the territory rested in the hands of Colonial America.  The flag that flew during that time were the 13 red and white stripes representing the colonies, and the British Union Jack where today we find the white stars on the field of blue.  Being unable to settle on a price, Franklin returned to Philadelphia for more important matters.
Our afternoon started in what was the financial district and economic center of Canada.  Since transitioning to Toronto, many of these architecture bastions have transitioned to other uses.  They have become offices, exclusive hotels and in one instance, a coffee shop. 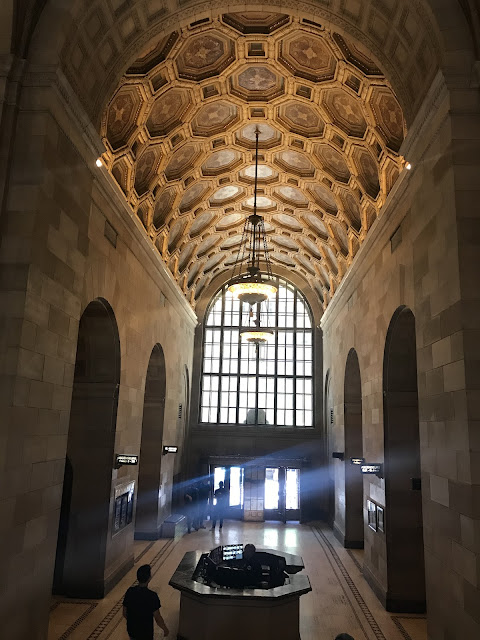 The cafe retains the grandeur of the 1920’s, while selling lattes from what used to be the tellers cages.  The cafe is found in the grand hall, on the main floor.  The space is also set aside for work spaces, conference rooms, and desks that can be rented by the hour or by the month.  The space is simply grand!
The afternoon tour provided just a taste of Montreal’s Underground City.  First built to accommodate access to a metro station, the idea grew.  It was an ideal situation for a city beset by harsh winters.  Shopping, entertainment, and work spaces contained in some 69 separate buildings are accessed by over 20 miles of underground walkways.  These walkways connect to Montreal’s extensive metro system.  It would be possible to leave your home, and travel to shopping or work in just your shirtsleeves, while outside temperatures are in the sub-zero range. 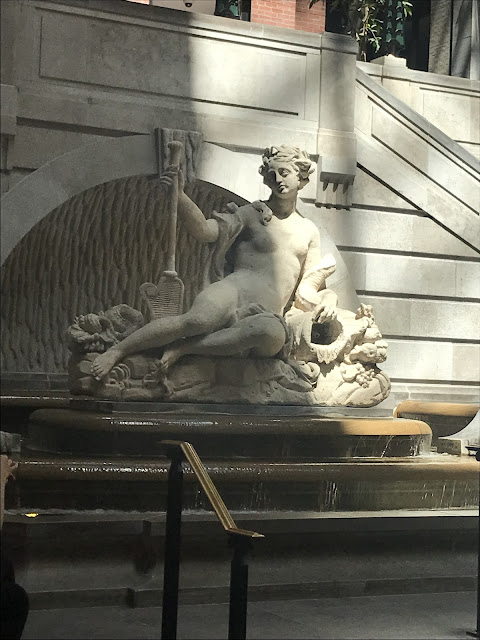