Jake and Carla, our friends and wonderful hosts here on this side of the island, suggested taking a "small boat" tour to see the lava flow enter the water.  These small boat tours differ from the big boat tours in that there are a maximum of 6 passengers on the small boat, and upwards of 50 on the larger ones.

We took the chance Monday morning to get a ride, and learned that there was room on a later tour, starting at 3:30PM. 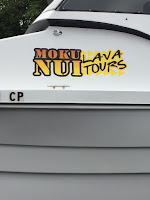 Capt. Kana from Moku Nui Lava Tours told us that the water was like glass, and the flow, as it entered the water was very active.

We joined 2 other couples for a 40 minute ride to the lava flow, spending about 45 minutes enjoying the show, and another 45 minutes back to the beach.

It is difficult to describe the magnitude of the flow, as the lava enters the water.  And pictures don't capture it either.  This most recent flow entered the water in July.  It is dependent upon the depth of the lava lake in the Halemau'uma'u Crater of the Kilauea Volcano.  The lower the level, the greater the flow into the sea.  Capt. Kana said that the flow was "very active!" with a big smile.


We were not disappointed.  The lava flow adds land to the island, primarily under water.  The lava builds up, breaking the surface of the water, forming massive benches, where additional flow adds to the accumulation.  At times, there are massive explosions, sending hot lava, and larger "lava bombs" into the air.  Some boats have been hit, though we were fortunate on our cruise.
As the water in this area is 120 to 140 degrees, so take a dip
at your own risk!  You can hear gas bubbles "pinging" on the
bottom of the boat, as the bench builds below you.  The
explosions result in red hot, floating rocks all around your
boat.
We had plenty of time to enjoy the show, taking many more photos that we should, or that you would want to see.  Though frankly, it was hard to stop.

We enjoyed wonderful views, as the steam and vapor clouds cleared.  Capt.
Kana would position the boat, so everyone on board would get an 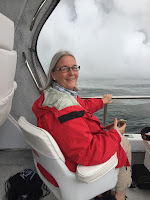 opportunity of getting good photos.  His first mate, actually his daughter also helped by taking photos of anyone who wanted one. 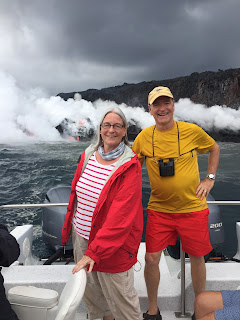 Once we had our fill, the good Captain headed back to safe harbor.  Along the way he stopped to point out a lava tube, and explain how they are formed.  Essentially the outer edges cool, as the interior flow remains quite hot until the flow dissipates.  The hotter lava flows out, leaving the tube.  Some are quite large, and many remain hidden.  This particular tube was revealed after a particularly large swell collapsed the cliff that concealed it from view.

Capt. Kana headed back and we enjoyed the view.  On our way back we were joined by a pod of dolphins who played in the bow wake.  He also reported that one of the Big Boats reported nearly hitting a whale and seeing another, on the way out to the flow.  He said that these are the first sightings of the season.

As we left the flow we both remembered what we saw, and enjoyed the view along the coast of the Big Island. 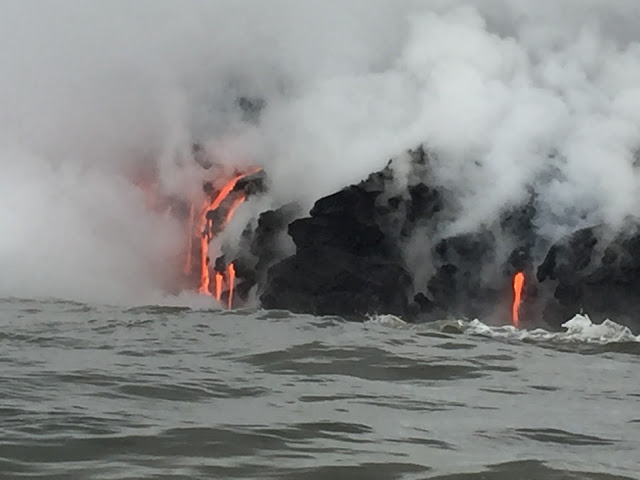 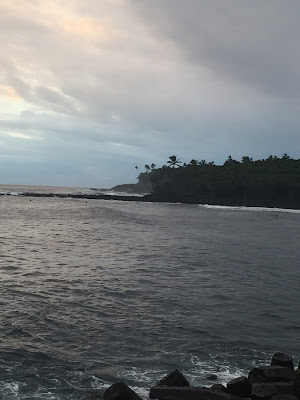