April 18, 2017
Close your eyes for a moment and imagine yourself paddling alone up a coffee colored river, in the panhandle of north west Florida, and then hearing the strains of Scott Joplin's The Entertainer floating towards you.  A short time later you see "The Eagle Man" wearing a red "Make America Great Again" ball cap paddling down river with his wife, in their bright orange Wall Mark kayaks.  Welcome to the Blackwater River!

We spent a day floating eleven miles of the river, after arranging a shuttle through Blackwater Canoe Rental and Outpost.  Paul, our driver, explained the necessary details about the float.  About how we will launch at a bridge, and not see another for about five or six hours and when you do, that is where you will haul out.  It is the Deaton Bridge, and the river is unnavigable below.

Several of our neighboring campers learned the hard way.  They took inner tubes and began their float at Deaton Bridge.  They left Monday afternoon, and weren't found until 4AM Wednesday morning.  They weren't reported missing until Tuesday evening.  That is a long time to spend in a Florida swamp in nothing but swimming trunks, t-shirts and flip flops. 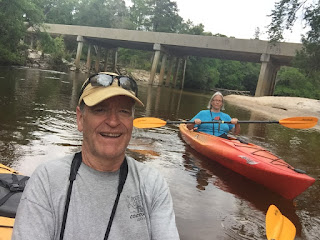 Upon encountering Jim and Jane, a couple a bit older than us, they insisted on guiding us to the nest, though explained that it was empty.  The pair had already bred, and headed north.  The eaglets will usually fledge in mid March.  We enjoyed anchoring on the "Gondola Tree" directly across from the nest, and having a leisurely conversation with the couple.  They were excited to learn that we were from Colorado, and more excited about the State's policy on pot.

Jim explained his music.  He repairs sells, tunes and repairs pianos.  He also plays them.  He records about an hour of music to listen to, through his Bluetooth speakers,  while he paddles the river. When he hears a missed note, he erases the piece, records it again after fixing it.  Jim is particular about his music.  He says that he can play the Moonlight Sonata in a way that will bring tears to your eyes! 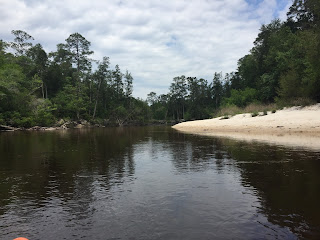 Jim and Jane were off ahead of us.  We watched them paddle their orange kayaks down river, Jim's music, mixed with a little bit of pot smoke carrying upriver to us. 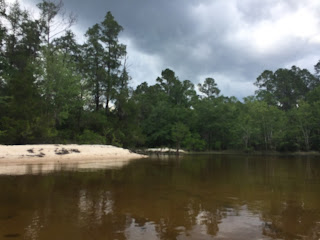 Meander would be the best way to describe this river.  It took about 10 minutes to drive the six miles to our launch point at Bryant Bridge.   It then took us six hours to float the 11 miles down fiver to our takeout which was right next to the campground.  That included a very enjoyable lunch on the white sand beach, about halfway through.

We saw very few people, and fewer wildlife.  To my disappointment, and my Brides joy, we didn't encounter any alligators.  We did see quite a few River Cooters, or turtles sunning themselves on logs in the river.

After lunch we did paddle for a time in a Florida Panhandle thunderstorm, before seeking shelter under a tree on the bank.  The rain soon let up, and we continued on downriver.

We enjoyed our stay at the state park.  There is a white sand beach, along the river, within walking distance of the campsite.

The river itself is coffee colored, stained by the tannins it picks of from decomposing vegetation as it flows into Florida from it's head waters in southern Alabama.  The river bottom is mostly the white sand, you see on the beaches, and the water an average of three to four feet deep.


The park has a cypress forest, as well as the Florida's predominate conifer, the long leaf pine tree.  We had a reminder of home when we checked in, as they conducted a controlled burn in the park the day after we arrived.  Our river guide said that they conduct the burns by sections routinely to reduce the risk of wildfire.