April 10, 2017
We have spent almost a week here in Oak Mountain State Park, outside of Pelham, Alabama.  It is described as the largest state park in Alabama.


We delayed our arrival by a day to avoid some rather severe weather which was forcast along the way down from Georgia. We arrived and had a day of nice weather, before the sever weather moved in again.  We were inundated by Severe Thunderstorm Warnings, and Tornado Watches.  While we got a lot of rain, and some strong wind gusts, we avoided the tornado's and large hail that was reported all around us.


We spent the day in AIROSMITH looking at our weather apps, and following weather radar, and storm tracks.  We could have passed as a mini Emergency Operations Center!

It does raise the question about how one handles dangerous weather while living on the road.  I had already committed to leaving the area of a forecasted hurricane.  Hopefully in enough time to avoid the crush of the mandatory evacuation order!  But what to do when you, and the five surrounding states are under the threat of dangerous weather?  "Be Storm Aware" as the campground host told us. And park near the storm shelter (we were nextdoor).  Have good insurance.  And be lucky.  Always good to be lucky.


Once the weather cleared, we had the opportunity to explore Birmingham a bit.  I also took an 11 mile mountain bike ride among some tall pines, rocks and rolling hills.   Many of the shelters and bridges in the park were built by the men of the Civilain Conservation Corps, or the CCC's.  Here they used local materials to build shelters and bridges, many are still visible and in use today.  My dad served in the CCC's as a young man.  He spent his time working in Montana.


My ride took me along the Dog Cat Snake Trail, through The Chimneys and The Rock Garden.  Finally climbing through Garretts Gulch and Thunder to the Red Road, and a bone rattling downhill to the North Trail Head and the Campgound.  Much of this park has infrastructure that was built by the men of the CCC's. 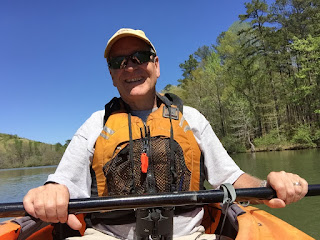 And my bride and I finally got the kayaks into some southern water, taking a several hour paddle around Oak Mountain Lake, seeing Herons, and large turtles sunning themselves on logs.  These are now what make up our backyard. 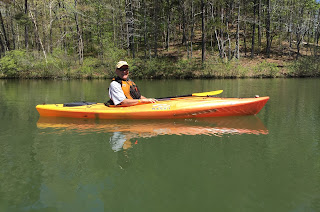 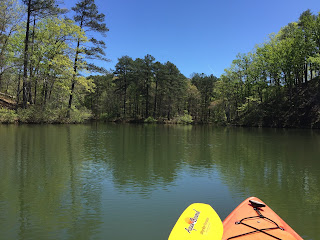 The nice weather and the weekend brought out other campers with whom we could visit.  The couple from just outside of Toronto who were here for a wedding.  They were playing golf along the way.


The police officer from nearby Homewood, who just got a brand new A-frame camper.  And the young couple, and their 3 month old German Shephard who were on one of their first trips with their new 5th wheel camper.  She was in love with Airstreams and we were happy to give her a tour of AIROSMITH.  It turns out that he grew up just outside of Maher State Park, where we will visit in a week or so, and he had great recommendations for places to eat.


We always like that!  Hopefully, these are folks that we can see again somewhere down the road. 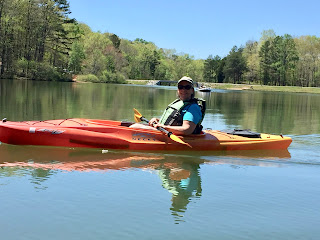