Georgia On My Mind

April 06, 2017
One of our main reasons for traveling is to connect and re-connect with friends and family.  It is our way to honor and celebrate those friendships.

It has been no more present than our visit with friends Curtis and Kathy over the past several weeks.  We arrived at their home, just outside of Calhoun Georgia fresh from out RV Driving School in New Bern, North Carolina.  Our friends had agreed to let us park AIROSMITH there while we took a quick trip back to Boulder.

Arriving at thier 10 acre homestead, we not only put our new found driving skills to quick work, but also violated the very first principal of our training.  Which is to scout the location where you will park BEFORE you pull in to park it!

They have a wonderful home, set above the county road that leads to it.  There is a single lane paved driveway that is about an eighth of a mile long.  The drive winds uphill, rising a hundred feet or so, to where we were to park.

We thought that surely there must be enough room to park the Airstream at the top of the drive.  We should have scouted!!  Because we didn't, we had to back everything DOWN the drive, only to turn around and back everything UP in order to park.  We did do that like Pro's however.  Steff jumped out to direct, I was watching through mirrors and the backup camera.  We put our training to good use, and learned to SCOUT first!!

Our time in Georgia was split between a week long trip back to Boulder, followed by time to visit with our friends.  Curtis roasts and brews coffee, so it was espresso every morning.  Kathy is a wonderful cook and she fed us better than we deserved.  They also know the best restaurants in the area.

They live close to the town of Adairsville, a town that played a role in the Great Locomotive Chase during the Civil War.  The chase began when a James Andrews, and civilian scout and spy for the Union and his team of volunteer raiders commandeered a train south of Adaisville.  Their intention was to do as much damage to the rail line between Atlanta and Chattanooga. 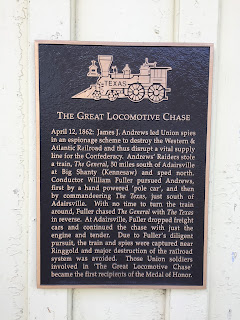 They were pursued by William Fuller, the conductor of the commandeered train.  He fist chased him by push car, and then a succession of locomotives.  Andrews raiders were on the General, Fuller eventually on the Texas.  Andrews and most of his men were eventually captured short of thier goal.  The Confederates tried and executed them as spies.  Some of the raiders were the first recipients of the Congressional Medal of Honor.

The event was re-created in film, by Walt Disnet where Fess Parker played Andrews.  I liked being in an area (unexpectedly) that was the focus of  a favorite childhood movie.  Now if only I can find the location for Sancho the Homing Steer!

The best part was having the time to visit with Curtis and Kathy. Enjoying the time spent with good friends.  Learning about Curtis's gardens and watching home work with them.  Hearing about thier plans for the "Cabin".  Feeding Spots and rubbing Roxy's belly.  Watching Kathy make wonderful meal, mostly from scratch. Talking about, and remembering family, and mutual friends.  Spending time solving the world problems late into the night.  This is very much what travel is to us.