April 20, 2017
We have spent the last week parked here at the Meaher State Park, in Spanish Fort Alabama.

We arrived at our waterside camping spot, greeted by four allegators patrolling the shore.  On most mornings they are there sunning in the shallow waters of Ducker Bay, which is a smaller part of the Mobile-Tensaw River Delta.


This is the little sister to the larger Mississippi River Delta.  It is home to a massive amount of flora and fauna, including those alligators, who prefer the shallow water and mud bottoms that make it easer to catch fish.  Better the fish than us.

Knowing nothing about this area we decided to take one of the several city tours which provide a good overview of Mobile.  We took the Trolly Tour with Gulf Coast Tours, hopping aboard at the Fort Conde visitors center. 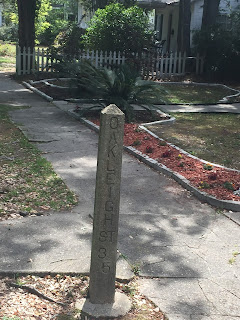 We spent the morning getting an overview of Mobile's historic districts, as well as finding our city bearings.  After the tour, we walked the neighborhoods, finding our way to Callihan's Irish Social Club, established 1946. 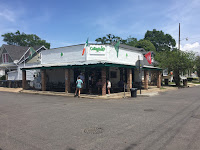 My Bride had a burger and a Fat Tire, I had a Shrimp Po Boy and a Guiness. How good those beers tasted in the south Alabama heat!


Mobile will tell you, that it is HERE that Mardi Gras was born.  They held the first organized celebration in 1703.  There is museum to Mardi Gras in town and a new Mardi Gras Park to mark that history.  We saw evidence in Spanish Plaza to the city's Mardi Gras roots.

Mobile has a strong Spanish heritage, which maintains strong ties with Malaga, their sister city in Spain.  The Spanish Plaza honors those ties. 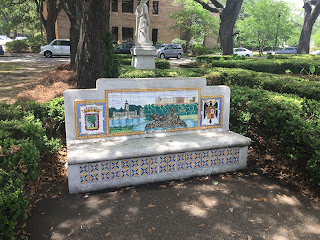 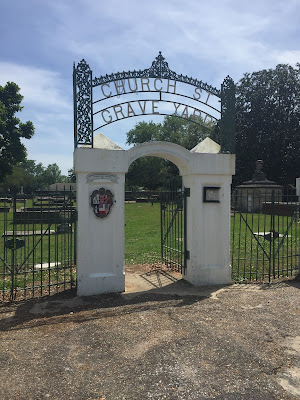 We strolled the Church Street Graveyard where some of the first settlers are buried following a yellow fever outbreak.  Many of the tombs are above ground crypts. 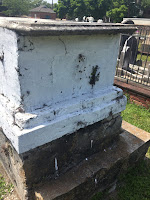 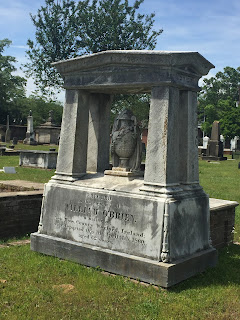 I don't know if that was because it was their custom or because of a high water table. 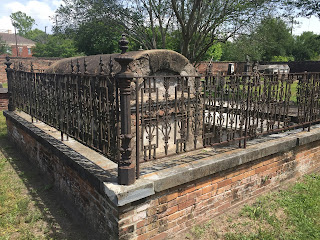 In any event, it was a peaceful place to walk.