Skip to main content
December 04, 2016
I thought that I would share a little about our new home.  This is a 2017 28 foot Airstream Flying Cloud with rear twins beds.  The Flying Cloud is a basic model but Steff and I really liked the efficient contemporary design.

We chose this floor plan for several reasons.  This is the shortest trailer that allows for a separate lounge and dinette.  This means we can sit and visit without needing to remove the table and then put it back up again in order to eat.  The twin bed floor plan actually gives us each more sleeping area, then does the queen sized bed that is offered, known as a "trailer queen".  Yes that is a term!  As we talked to other full timers, we also learned that the twin beds allow us to get dressed in the bed room.  The "trailer queen" forces one to dress in the hallway.  You would not be surprised to learn that a trailer queen might force you to do such a thing!

We have been working very hard to scale down our lifestyle and possessions in order to fit into this 224 square feet of living space.  It has been a challenge downsizing from our 2100+ square foot home, where we have spent the last 36 years.  Though, I must tell you the experience has been liberating!

Our garage/storage/shop will be in the bed of our tow vehicle, a 2010 Ford F150 pickup truck.  But more on that later.

The photo below shows what the exterior of ours will look like.  We configured the trailer exactly as we wanted it.  The major upgrades are a factory solar system, allowing us to dry camp, or to be off grid, for as long as the fresh water holds out.  We added a window awning package, that will give additional shade.  We also are upgrading to a Boondocker 60 Amp, 4 stage Converter Charger, which is a little more robust than what comes from the factory. 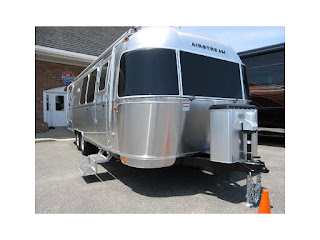 We purchased the trailer from Colonial Airstream in Lakewood, New Jersey.  They will take delivery of the trailer and make the modifications and install our tech gear and antenna's before we pick it up from them at the end of February.  The folks at Colonial are the best!

Until then, we remain homeless and are spending much of our time on friends couches.  Between now and when we will visit the Big Island in Hawaii; move our son from Michigan, back to Colorado; and enjoy a ski trip at Copper Mountain.  As you can image it has been difficult!

Many folks are asking, "What is your first destination?"  It is a recreational vehicle driving school in North Carolina.  That should be fun to talk about!!

As you can tell, I am new to "blogging", but not new to "talking".  I am still learning this application, and am hoping to set it up to simultaneously post to my Facebook page.  For those of you who would prefer to avoid Facebook, you can find us at www.airosmithworld.com.

Talk to you down the road!